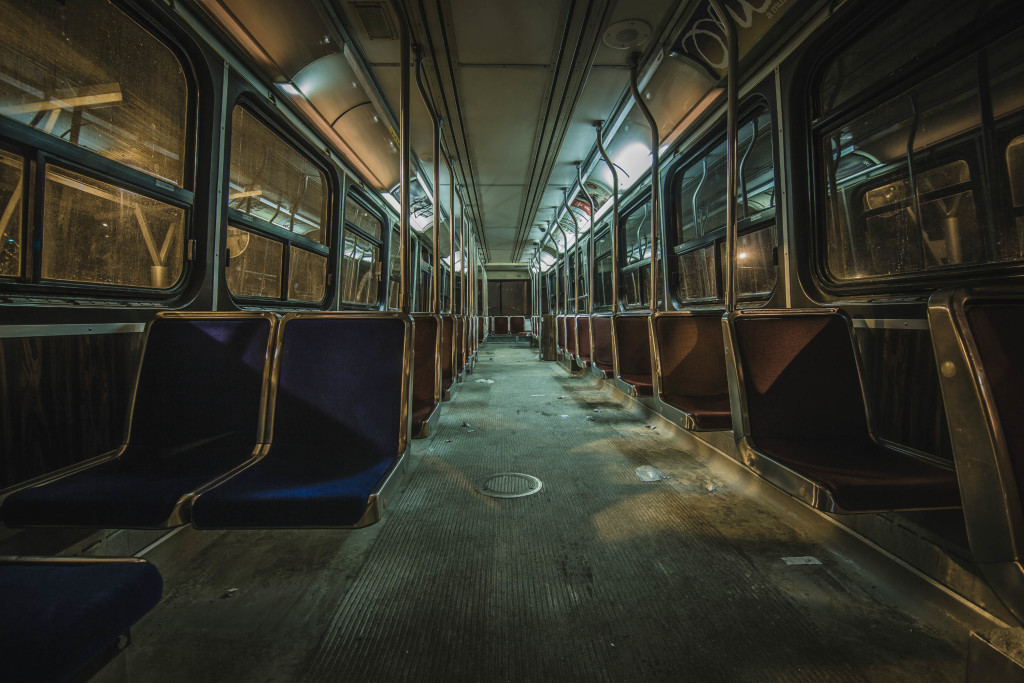 I’m just a woman who publishes blog posts inconsistently, but if someone were to look into it I bet Toronto would win the title of ‘Most Low-Key Racist City in the World’.

This is your cue: I’m going to use the ’n’ word in this post and if that bugs you, click away. Also, in case it’s not obvious, I am not a doctor. I’m just describing what I’ve observed and what’s worked for me. What’s working for me.

Just because we’re all living here from our different parts of the world, doesn’t mean we’re holding hands singing about love and peace. Some people here don’t want to touch certain other people. In this city, people are racist in subtle ways, not so subtle ways, very subtle and very, very subtle ways.

None of this is new if you’re a person of colour (POC), or if you’re paying attention. As much as we’re hyper-aware of how other people behave, we have to be aware of what’s going on in our own minds. It’s too easy to spiral here, imagining you’re being treated differently because of the colour of your skin. Especially if you’re not taking care, or if you’re keeping these thoughts to yourself.

It’s too easy to spiral here, imagining you’re being treated differently because of the colour of your skin. Especially if you’re not taking care, or if you’re keeping these thoughts to yourself.

Most of the time it’s like this: we’re in one of Toronto’s bar / club venues that plays music so loud you can’t order your fancy special drink without losing your voice.

The waiter or barkeep will give us service that seems slightly different than those other tables, or other people got.

Or someone will make a comment that seems directed at us, but we can’t be sure. Or the bouncer will move the line ahead until they get to us.

And then afterwards, when we’re out of earshot, a caucus will happen about what may, or may not have been, the offending behaviour.

Did they do what they did, say what they said or treat us differently in any way because we were “the coloured section”?

Were we charged more?

Were they rude to just us?

Did we get bad service?

Did they or didn’t they?

Or it could be racism, most likely in the form of microaggressions.

But we can’t ask. Oh God, no. Because “OF COURSE NOT” would be the response. We’d get that “OMG, You’re crazy for even thinking that!”-*look* and told “absolutely not!”. There’s shock, horror, repeated apologies and clutched pearls.

Then there’s just out right racism. This year I was called a ‘nigger’ at least once. Maybe twice, but I’m not sure. Sometimes I imagine I’m being called a ‘nigger’, especially if I’m in mall or crowd. That imagining is worse than actually being called a nigger. Thinking I’m hearing it means my mind is already threatened, scared, on edge.

A person could go months, maybe years in this city without outright racism like that, most often it comes out of nowhere. This city may be the “most multicultural in the world”, but that doesn’t mean anything. It’s like saying the CN Tower is a tall building.

Regardless of where it falls on the spectrum, things like this can stay in the mind, maybe for an hour, maybe for the rest of the night.

What the Obama’s Would Do

Even typing these words, I want to go out and buy all the Tim Horton’s chocolate chunk cookies (which proves the point).

Some people can see behaviour like this and move beyond it. Not everyone is like that. Others internalize it. It feeds into their perception of the world as an angry, potentially dangerous place.

The people who can keep it moving, who don’t imagine they’re being called the ‘n’-word in a crowd, I see them like Michelle Obama-types.

The behaviour, if it happens, is noticed but that’s it. If it needs to be addressed, it’s addressed. But beyond that, it’s not discussed, it’s not analyzed and it’s definitely not shared.

I’ll let her say it:

Are you going to get angry or lash out? Or are you going to take a deep breath, straighten your shoulders, lift up your head, and do what Barack Obama has always done — as he says, ‘When they go low, I go high.’ That’s the choice Barack and I have made. That’s what has kept us sane over the years. We simply do not allow space in our hearts, minds, or souls for darkness.

This is not easy. I know being called a ‘nigger’ is not about me, but that doesn’t mean I understand all the time, that I don’t still have an initial reaction. I’m just willing to work on it.

It doesn’t matter if someone really is treating us differently because of our race, or the colour of our skin. That’s their problem. We need not make that our problem. If the behaviour needs to be checked, it’s checked. But I’m working on not having space in my mind for anything beyond that.

In my experience, reactions to racism can go from being like the Obama’s, to completely getting unwound. Being stressed, angry or hurt makes it even more important to take care so I don’t lose myself, regardless of what level of racism I’m looking at.

I’ve learned this is one of the hundreds — maybe even thousands — of reasons why self-care is so important.

It’s not just about meditating and yoga. It’s practicing awareness: paying attention to how I feel and what I’m thinking, especially when I’m not good.

Sometimes (often) it’s acknowledging something simple like being hungry. Or my bladder. Sometimes it’s being hurt or upset. Knowing that I’m hurting about something is automatically a signal that I need to watch my thoughts even more carefully, be more determined about taking care of myself.

And other stuff I might tell you about later / prefer to keep to myself. My rule when it comes to self-care is: do what you want. Be the only black person in the yoga class if you need to (or whatever your equivalent of that is). Put you and your health above feeling out of place, or feeling like you’re being watched, or feeling like you might say or do the wrong thing. Please and thank you.

4 Self-Care Resources for Days When the World is Terrible

Check out the chapter ‘Building A Self-Care Guide’ from CAMH.

An infographic I created based on the info from CAMH. Feel free to save / download and share if you want: 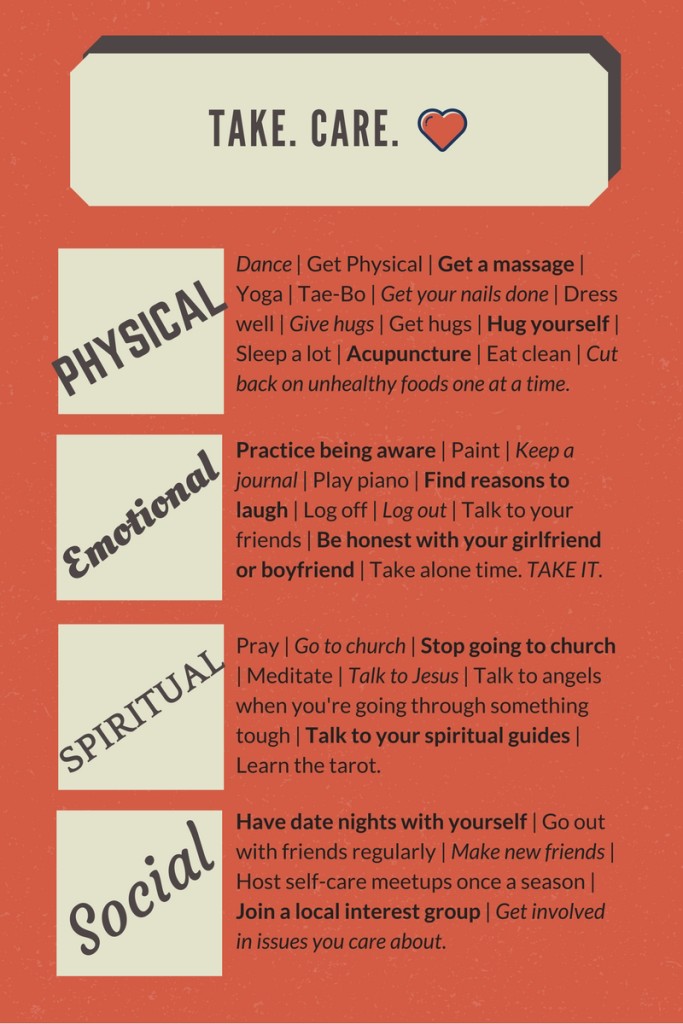 *Sometimes it’s not just a matter of taking care of yourself. Sometimes you need more than to eat or use the bathroom. Talking to someone is self-care too, though. So talk to someone if you need more support. Be unapologetic and determined about doing what you need to do.